Dermatomyositis, abbreviated DMS, is an autoimmune disease of both the skin (derma-) and muscles (myo-) that occurs in both humans and dogs, especially collies and Shetland sheepdogs. The disease is characterized by the appearance of skin lesions, generally first on the face and legs. Lesions appear early in life, sometimes as young as 7-11 weeks of age. Disease onset seems to be linked to stress, such as vaccination or owner surrender. Most affected dogs will develop lesions by 6 months of age, and maximum severity is reached at 1 year. Progression seems to be variable: some mildly affected dogs will only develop few lesions.

DMS usually starts as a rash on the face and feet and will progress to the tail and ear tips. Most commonly, lesions start with loss of hair, redness and scaling of the skin. Crust or red vesicles are also seen. In the most severely affected dogs, the skin is eroded, ulcerated and scarred.

In addition to skin lesions, some dogs also suffer from inflammation of the muscles (myositis). It typically occurs after the skin lesions have been recognized as DMS, and its severity often correlates with that of the skin lesions. Mildly affected dogs often have little to no muscle loss. In severe cases, however, DMS can lead to muscle wasting, and difficulty in eating and swallowing which can result in secondary pneumonia and megaesophagus. Some severely affected dogs also develop an abnormal gait.

A smooth collie showing myositis, seen as lack of muscle under the zygomatic arch. 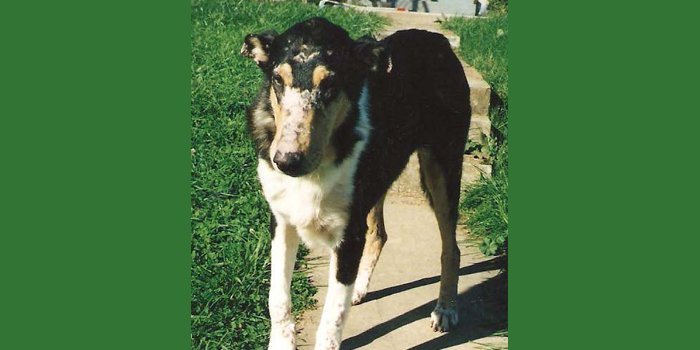 A tricolor smooth collie with DMS lesions on its face.

The only way to diagnose DMS is through a skin punch biopsy and electromyography. Ideally, a new lesion with minimal scarring should be used. In a skin punch biopsy, a device resembling a pencil is used to puncture and remove skin layers. This allows for their analysis, but may potentially leave scars. The most common finding in these biopsies is atrophy of the hair follicles and adjacent inflammation.

Until recently, no DNA test was available to help track or diagnose DMS. It was proposed to have an autosomal dominant mode of expression with an incomplete pattern of expression. DMS was called the “breeder’s nightmare” as it would pop up, seemingly out of nowhere.

In 2017, Dr. Leigh Anne Clarke at Clemson University scanned the collie and sheltie genomes and found two regions that seem to correlate to incidence of DMS. These were dubbed the A locus and B locus. They later identified another region, the C locus. This research eventually led to the development of a DNA test to evaluate risk of Dermatomyositis. This DNA test is available through Wisdom Health with a rebate for Collie Health Foundation members. The DMS test is also one of the three DNA tests required for CHIC certification.

First and foremost, it is important that you understand that the test is a “RISK ASSESMENT” test and not a genetic marker test. In DMS, there is no such thing as “normal”, “clear” or “carrier”. The best any dog can be is low risk. This means they can still get it or pass it along.

In the DMS risk assessment test, the upper case letters represent risk alleles, while lower case letters represent “wild” or normal alleles. In short, the more high risk (uppercase) alleles a dog has, the higher the risk of developing DMS. For locus A, “A” is the risk allele while “a” is the normal allele. The C locus is often represented by numbers, where 002:01 (and less commonly, 001:01 and 009:01) are risk alleles while any other numbers are normal alleles. Most purebred collies are homozygous (they carry two copies) for the risk allele 002:01, so often breeders only show results for the A and B loci.

MODERATE RISK GENOTYPES – In the study, up to half of dogs with these genotypes developed DMS.

HIGH RISK GENOTYPES – In the study, over 90% of dogs with these genotypes developed DMS.

Notice that homozygosity for DLA-DRB1*002:01 (C locus) increases the risk of DMS from low to moderate (aaBB) and from moderate to high (AABb and AaBB).

Using these tests results in a breeding program: 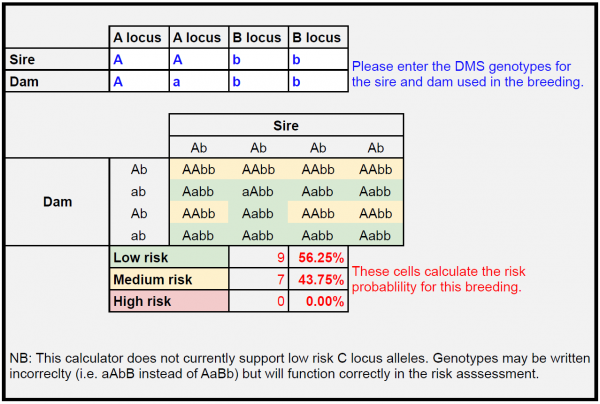 This Punnett square calculator spreadsheet is available as an online tool to help you predict the DMS risk for your breedings.