The Story Behind The Collie Health Foundation Logo

Since The Foundation’s inception in 1986, each year has brought growth and change. One of the most recent changes, is the revision of our name from The Collie Club of America Foundation to The Collie Health Foundation. The former name caused some confusion and the erroneous assumption that The Foundation was a part of the parent breed club. So, the new name and, hopefully, an independent identity was formed.

In the meantime, we were having difficulty with our logo. The original artwork became lost so the logo we’ve been using is copies of copies – losing detail with every subsequent round of copies. It became apparent that we needed a new logo to go along with the name.

Our new logo was generously donated by Diana Hiesilieu. There is a story behind this new logo, a story about a Collie we bred and had the extreme privilege of knowing – A Collie by the name of Noah.

Noah was born in June to a mother who hated thunderstorms so much that one caused her early death when he was about 5 weeks old. We named him Camloch’s Storm Warning, because he had survived the storm that was his mother. We had done several litters with a specific hope of a beautiful sable. When he arrived, we were so excited. Since there were only two in the litter, they received extra handling and care. We noticed when we held him, that he had a strong heart murmur that would require further examination. My husband is a veterinarian who consulted with a cardiologist. He sent Noah’s EKG via modem for evaluation and consultation when Noah was only 8 weeks old. The diagnosis was, subaortic stenosis, which is a known hereditary defect in several breeds. Fortunately, at this time this defect is rare in Collies. His prognosis was not good, he was only expected to live a year.

Noah was the sweetest of puppies. We, of course, lavished every good thing in life we could on him as he had to gather his allowance of goodness in such a short span of time. He spent most of his time in the house with us, but also got to enjoy outside time with the other dogs. It was hard to share him, but he enjoyed it so.

The national at Virginia Beach was his 10th month. We hovered over him so much. We didn’t know when his end might draw near. We even took him along so that we could watch him closely. Attending that national and doing readings, was a pet psychic. She specialized in communicating with animals and “reading” them and their future. Because he meant so much to us, I had a reading done. I wanted to know if he was comfortable and what his future may hold. The psychic assured me that he was, indeed, comfortable and that his time was not yet near. She felt, strongly, that he had a job to do yet here on earth before he passed on. She was not sure what that job might be, but she was sure he hadn’t completed it yet.

About five months after we had returned home, we were so blessed to have Noah still with us. He had passed his 1st birthday in June. One day, I was outside picking up the runs. I had most of the dogs shut in, except for Noah and a group of 5 seven-week-old puppies. They were each in separate runs. Generally, adults have no interest in puppies. They are too exuberant and bite! Not for Noah. He took one look at those little ones and turned inside out with excitement. He was so fascinated by the puppies that I decided to take him over for a visit with them, supervised of course. He sniffed them over, every inch of every one of them. His tail never stopped wagging. Despite this excitement, I noticed that he was very careful where he stepped, making sure he didn’t hurt them. I decided to leave him with them while I finished my chores, keeping a constant ear out for any trouble. There wasn’t any.

It soon became apparent that these were Noah’s puppies, even though he was not related to them but by the line they all came from. He spent every minute of every day with them, except for those minutes which I insisted, selfishly, were mine. We have a one-acre play yard which I began taking Noah and his puppies to play in for an hour or so every day after work. I’d sit with my back against a tree and watch them play and play with them. It soon became evident that Noah considered it his responsibility to give his puppies an education. While I sat there watching, the first thing he taught them was an introduction to that play yard. He took them on a stroll of the entire perimeter of the yard. Until that lesson, they had been hesitant to wander far from my side. They also didn’t seem to realize the vast space that they really had to play in. Now, some might say that Noah was inclined to patrol his perimeter as some intact males are apt to. Not Noah. It was very clear that his purpose was to educate the puppies about their environment.

Once the puppies were more acclimated to the play yard, I began attaching nylon leads to their collars to drag along as they played. This gradually accustoms them to the feel of some weight on the collar, and should they step on their own lead, the beginnings of gentle tugs. Again, while I sat there, I watched Noah take on another lesson. He began picking up one lead at a time. If that puppy balked at the gentle pressure on the lead, Noah would play bow and wiggle and encourage that puppy to follow him. Once the puppy started towards Noah, he would trot along beside the pup slowly keeping the lead in his mouth. He systematically gave all of the puppies lessons in what the lead meant. His lessons were done in exactly the same manner I would have. He was gentle, and encouraging and tolerant. Whether there was some natural instinct in him as to what I wanted to accomplish with the puppies or he reached down in his memories to the days when I lead trained him myself – we will never know.

He stayed with the puppies that stayed on until his health started to fail. He did make it just past his second birthday – a tribute to medicine and his dedication to his puppies.

This new logo would represent the health we wish to preserve, the education we wish to share, and the handing-down from one generation to the next our wisdom and experience.

Respectfully submitted with much love for the Collie and our sweet Noah, 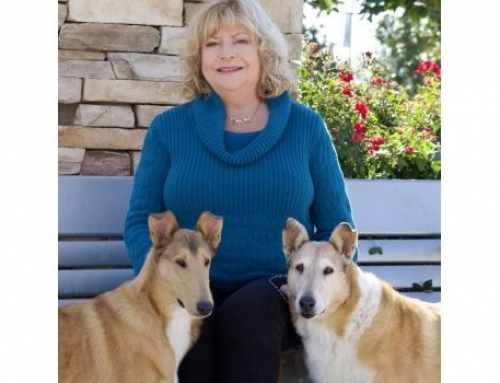